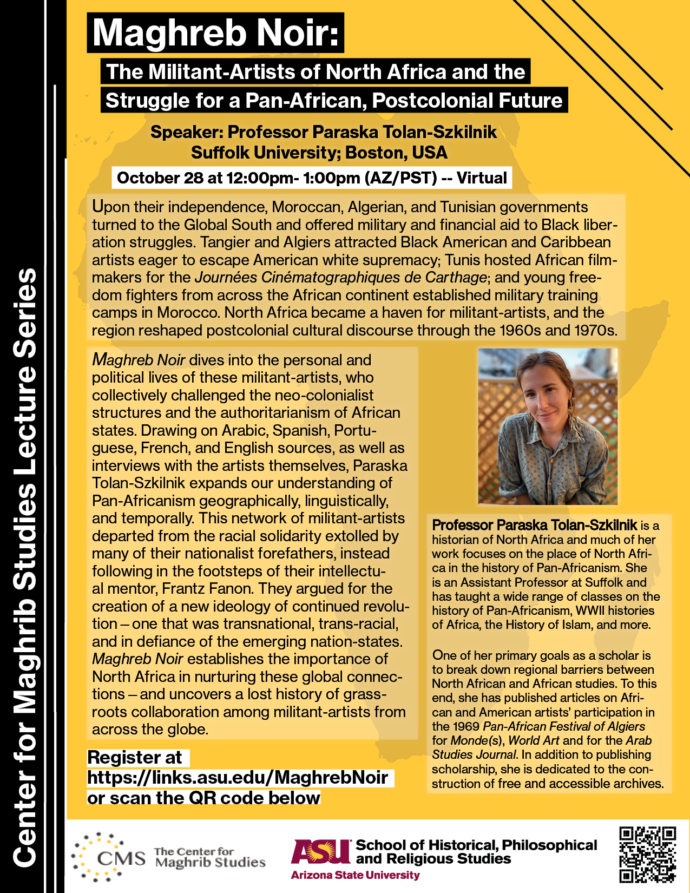 Professor Tolan-Szkilnik will discuss her upcoming book, Maghreb Noir: The Militant-Artists of North Africa and the Struggle for a Pan-African, Postcolonial Future, due out July 2023.

Upon their independence, Moroccan, Algerian, and Tunisian governments turned to the Global South and offered military and financial aid to Black liberation struggles. Tangier and Algiers attracted Black American and Caribbean artists eager to escape American white supremacy; Tunis hosted African filmmakers for the Journées Cinématographiques de Carthage; and young freedom fighters from across the African continent established military training camps in Morocco. North Africa became a haven for militant-artists, and the region reshaped postcolonial cultural discourse through the 1960s and 1970s.

Maghreb Noir dives into the personal and political lives of these militant-artists, who collectively challenged the neo-colonialist structures and the authoritarianism of African states. Drawing on Arabic, Spanish, Portuguese, French, and English sources, as well as interviews with the artists themselves, Paraska Tolan-Szkilnik expands our understanding of Pan-Africanism geographically, linguistically, and temporally. This network of militant-artists departed from the racial solidarity extolled by many of their nationalist forefathers, instead following in the footsteps of their intellectual mentor, Frantz Fanon. They argued for the creation of a new ideology of continued revolution—one that was transnational, trans-racial, and in defiance of the emerging nation-states. Maghreb Noir establishes the importance of North Africa in nurturing these global connections—and uncovers a lost history of grassroots collaboration among militant-artists from across the globe.

One of her primary goals as a scholar is to break down regional barriers between North African and African studies. To this end, she has published articles on African and American artists’ participation in the 1969 Pan-African Festival of Algiers for Monde(s), World Art, and for the Arab Studies Journal. In addition to publishing scholarship, she is dedicated to the construction of free and accessible archives.